WHAT IS REALLY HAPPENING WITH THE CHINESE ECONOMY?

Which is the world’s largest economy? Converted at market exchange rates, China ($11tn) is smaller than the United States ($18tn) but, on the PPP (purchasing power parity) basis of conversion widely regarded as superior, China (at $21tn) now takes the top spot.

Be that as it may, there can be little doubt that the economy of China is second to none in terms of its importance to global growth. In local currency, Chinese GDP was RMB 68tn in 2015, four times larger in inflation-adjusted terms than it was in 2000. China has been the primary engine of world growth since the millennium, and most observers, it seems, expect it to remain so for the foreseeable future.

In short, if the Chinese economy were to catch a cold, the world economy would be in for a bout of influenza at best, and could well face the economic equivalent of pneumonia. This is as true of debt as it is of growth – wobbles in China would trigger shock-waves around the world.

There could not, then, be a more important subject than China for evaluation using the Surplus Energy Economics Data System (SEEDS).

Readers will find a downloadable PDF of SEEDS statistics for China at the end of this article.

For China’s army of Western admirers, the conclusions set out here are disturbing.

Most strikingly, Chinese economic growth has, over the last decade, become a hostage to borrowing on a gigantic scale. Though used primarily for capacity expansion rather than for fuelling consumption, this borrowing has had a hugely distorting effect on growth. Were China to cease borrowing about 20% of GDP annually, as she does at the moment, growth would fall back from 6.5% to a trend rate of 3.4%.

There must be limits to quite how long China can go on using borrowing to create growth. Based on reported GDP, debt already stands at 246% of reported GDP, up from 141% just seven years ago. When measured against an underlying GDP figure stripped of estimated debt-funded consumption, the ratio climbs to 384%. On this underlying basis of measurement, the ratio could hit 500% within just five years.

In short, the Chinese economy is following the tried-and-failed Western policy of using debt to manufacture “growth”.

There are clear limits to how much longer she can go on doing this.

It must be understood from the outset that the reliability of much Chinese data seems questionable. At the simplest level, key metrics like growth and unemployment appear not only remarkably unvarying but are, equally remarkably, always exactly in line with official expectations. Some economic numbers seem hard to reconcile with non-financial, volume indicators.

There are also issues of discontinuity, where methods of calculation seem to change without the data for prior years being restated to match. It should also be understood that international data sources largely replicate these issues, since they are necessarily based on Chinese official statistics.

Let’s start with an indicator always regarded as pivotal in SEEDS analysis – the relationship between GDP and growth on the one hand and, on the other, debt and borrowing. The first chart compares GDP and debt in local currency at constant (2015) values. (Debt numbers used throughout this analysis exclude the inter-bank or “financial” sector which, were it included, would probably lift total debt from RMB 168tn to somewhere nearer RMB 200tn). 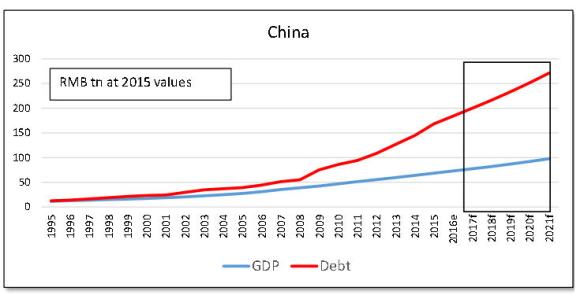 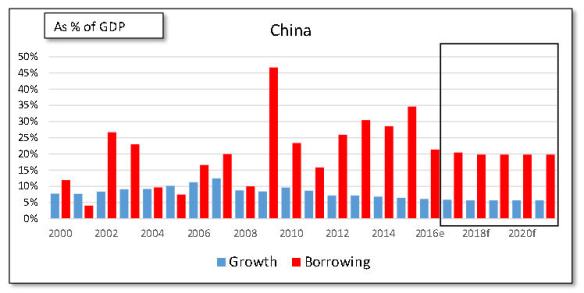 The picture that emerges is quite extraordinary. Over the ten years between 2005 and 2015, GDP grew at rates of between 9% and 14% annually, not even stumbling materially during the 2009 global downturn. But debt has grown by between 17% and 35% of GDP each year, with the exception of 2009, when debt increased by 47% of GDP.

What this means is that, over a period in which reported GDP increased by RMB 40tn, debt expanded by RMB 129tn. This is a borrowing-to-growth ratio of 3.2:1, still reasonably modest by Western standards, but a far cry from past Chinese practice – back in 2005, the trailing ten-year (T10Y) ratio was only 1.67:1.

This pace of change in the trailing average means that the relationship between borrowing and growth merits close consideration. China retains comparatively low levels of household indebtedness, which stood at 39% of GDP in 2015, compared with 79% in the United States, 87% in the United Kingdom and 104% in the Euro area. Households accounted for a modest 18% of all net borrowing in China between 2005 and 2015. Government debt, too, remains low by world standards, at 44% of GDP. Neither households nor the state, then, are bingeing on borrowed money.

But the biggest share of Chinese borrowing by a wide margin is the PNFC (private non-financial corporate) sector, which borrowed RMB 83tn in the decade to 2015, or 64% of all borrowing. This increased total PNFC debt to RMB 112bn in 2015, from about RMB 29tn in 2005, an increase so huge that readers should be reminded that these are constant numbers, adjusted to exclude inflation.

Unlike the Western economies, whose vice-of-choice is to use debt to fund consumption and inflate property markets, the Chinese bias is towards using debt for investment in capacity. In theory, capacity investment should be “self-liquidating”, because capacity increases should increase income, and thus fund the paying off of the initial debt. (This is contradistinction to consumer borrowing, which is “non-self-liquidating”).

But the self-liquidating characteristic of business investment depends on capacity expanding without depressing margins, something which happens when expansion creates major capacity surpluses. It is abundantly clear that Chinese PNFC borrowing has followed the course of excess, depressing returns in the process.

As a result, much of the Chinese business sector earns returns which appear to be well below the cost of debt capital. In this situation, an obvious remedy is to convert debt into equity. This, however, seems to have been tried, and failed, because it showed clear tendencies to crash the equity market.

Of course, PNFC borrowing differs from consumer borrowing, but it nevertheless finds its way into consumption and economic activity. If a business invests in new capacity, much of that investment finds its way into the pockets of households, either directly, through employment, or via suppliers. High investment helps diminish unemployment but, where this investment is non-self-liquidating, the effect is “borrowing to employ”, and this has parallels with Western-style “borrowing to consume”.

The judgment call here is this – how much Chinese borrowing has inflated consumption (and broader activity) artificially, meaning that this activity would disappear were borrowing to cease? The calculation made by SEEDS ascribes only 16% of all borrowing between 2005 and 2015 to consumption, probably a conservative estimate of how much net new debt has been used to inflate activity. Even so, this amounts to RMB 20.8tn, equivalent to slightly more than half of all growth (of RMB 41tn) in GDP over that period.

If that estimate is correct, underlying growth in Chinese GDP over the last decade and more has been far lower than the reported numbers.

As the next chart shows, this calculation puts Chinese aggregate growth since 2000 at 160% (RMB 27tnb) – still impressive, but nowhere near the reported 295% (RMB 51tn). It indicates that underlying GDP in 2015 was around RMB 44tn, a very long way adrift of the reported RMB 68tn. 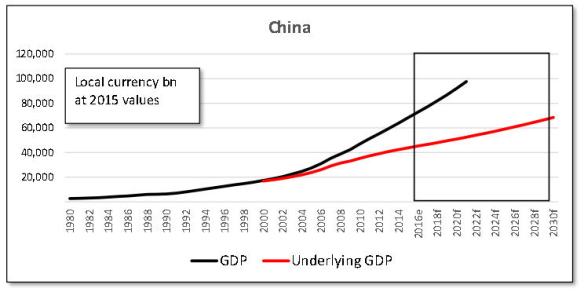 For how much longer?

The implications of this assessment are stark.

First, SEEDS estimates current trend growth at around 3.4%, far below official rates of 6.5%. It also trims per capita trend growth to 2.9% from 6.0%.

Of course, China can still record growth rates at or above 6% – but only if the country continues to borrow at recent levels. That would mean adding yet more surplus capacity, and depressing margins still further.

The final sting in the tail of this analysis is that, if underlying GDP is a lot lower when stripped of the borrowing effect, debt ratios are correspondingly higher. On the SEEDS basis of computation, aggregate debt already stands at 385% of GDP (rather than the reported 246%), and is growing a lot more quickly than publicly available numbers indicate, adding around 43% of GDP (rather than 20%) annually.

With the export-based model faltering, and with a great deal of economic activity dependent on borrowing, China may have ceased to be the powerful engine of growth that is so customarily assumed. 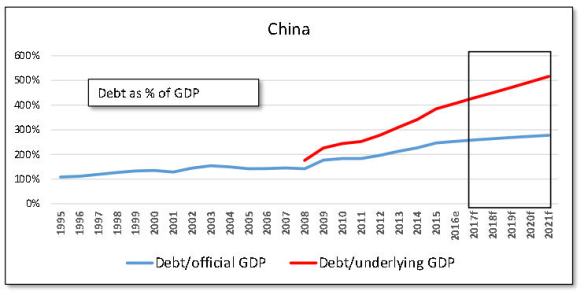