A SEEDS-BASED GUIDE TO THE BRITISH ECONOMY

As readers will recall from a previous article, SEEDS – the Surplus Energy Economics Data System – will soon cease to be a purely internal tool, and will be made available to those interested in using it.

As things stand, the intention is to make a summary version (SEEDS Snapshots) available for free download here in PDF format. Professional and business users will be offered a more detailed spreadsheet version (SEEDS Pro) at a modest price. In all, there will be 22 of each – 21 covering individual economies, plus a world economy version.

Rather than issue a technical user manual (though this may yet be necessary), it seems better to introduce the system here using a real example. The balance of reader comments suggests that the subject of this “worked example” should be the United Kingdom. It is hoped that even those readers who are not particularly interested in the UK will find this an interesting example of the economic decline phase after “peak prosperity”.

What follows here, then, is a comprehensive analysis of the British economy, conducted using SEEDS. Conclusions are left to the end, so that readers can follow the process of analysis through from start to finish. Here, for download, is the SEEDS Pro dataset for the United Kingdom. This is the premium version that will be available for purchase after SEEDS goes “live”. It is recommended that you download this now, in order to refer to it during the commentary that follows.

Let’s get a couple of technical points clear before we start. First, most economic data is presented in GBP, and the majority of this is expressed at constant values, so that the effects of inflation are excluded. Current data is converted to constant values using the broad-basis GDP deflator index, the base year being 100. (Pending the availability of complete data for last year, 2015 is the base year throughout SEEDS).

Second, where stated in US dollars for comparison, conversion is undertaken using the PPP (purchasing power parity) convention. This is generally superior to conversion using market average exchange rates, though some market-rate data is supplied as well, for those who find it useful.

After some summary tables, the SEEDS analysis begins with two tables related to energy. The first of these (starting at line 44 in the data sheet) is volumetric, and analyses the primary energy position expressed in million tonnes of oil equivalent (mmtoe). Like all tables in SEEDS, this runs from 1980 to 2030, and further amplification is provided by the first chart.

Peak energy production in the UK occurred in 2003, at 272 mmtoe, a number which declined by 59% to just 112 mmtoe in 2015. Against this, consumption has also declined, from 229 mmtoe in 2005 to 188 mmtoe in 2015. This decline reflects a number of factors, including greater energy efficiency, but also the ongoing shrinkage in manufacturing output.

As of 2015, fossil fuels accounted for 83% of British energy consumption, and renewables for 7.6%, which is far higher than the global average for the same year (2.7%). By 2030, the share of UK energy use provided by renewables is projected to reach almost 19%, though this rising share reflects, in part, the downwards trend in aggregate consumption. 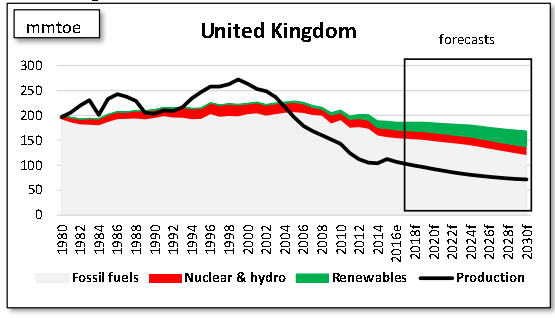 Whether the shift towards renewables has been cost effective is, of course, another question, and plays its part in the table of energy economics (starting at line 56). Obviously, the sharp decline in primary energy production has had a major effect on materials flows and costs. Back in 1999, the UK was a net exporter of 50 mmtoe, or 23% of demand at that time. By 2015, net imports totalled 76 mmtoe, or 40% of consumption.

This changing material balance has necessarily impacted the UK’s energy costs, measured in the data sheet both as ECoE (the energy cost of energy) and as EROEI (the energy return on energy invested). Reflecting global trends, the estimated ECoE of consumption (line 61) has risen from 3.8% in 2000 to 7.8% in 2015, which is not significantly different from a world average of 7.0%.

But the swing from net exporter to net importer has had a dramatic effect on the overall ECoE of the economy (line 62). Being a net exporter is advantageous, mainly because costs and taxes (which, of course, are revenues for suppliers and the government) are incurred at home rather than overseas. Accordingly, Britain’s overall ECoE is estimated to have soared from just 0.9% in 2005 to 10.3% in 2015. As we shall see, this has had a major adverse effect on prosperity.

For those who prefer EROEI measures, that of the UK in 2015 is put at 10.7:1, and is projected to fall to just 6.6:1 by 2025. Readers who understand EROEI will appreciate that a ratio this low poses a dire threat, not just to prosperity but to economic viability itself. 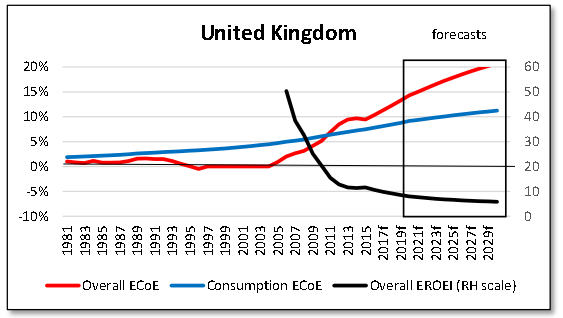 The role of borrowing

The relationship between annual growth and borrowing can be seen in the next chart.

The United Kingdom: growth and borrowing 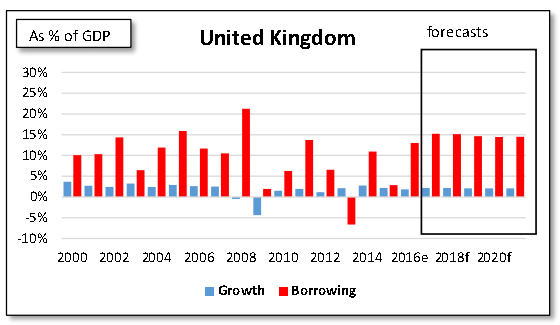 Clearly, borrowing on this scale is likely to have inflated GDP, by funding present consumption at the expense of future liabilities. What this really means is that, without this borrowing, growth would have been lower.

But how much lower? According to the formula used by SEEDS to measure this effect, £182bn of borrowed money was used to finance consumption between 2005 and 2015.

Though this estimate equates to just 13% of total borrowing (of £1,369bn) over that period, and is probably conservative, it accounts for most (85%) of growth recorded between 2005 and 2015. Reference to line 70 of the datasheet shows that, adjusted for the effect of borrowed consumption, underlying GDP in 2015 is estimated at £1,467bn.

This in turn means that, without borrowed consumption, GDP in 2015 would have been 21% lower than the reported number. It also indicates that trend growth is just 0.4% (line 79) rather than the generally-assumed c2%. On a per-capita basis, underlying growth is negative 0.3% (line 94), because the population is growing more rapidly than underlying (borrowing-adjusted) GDP. Even this, of course, is before we take trend ECoE into account.

The next chart shows these trends at a glance. The blue line is reported GDP, including consensus expectations out to 2021. The black line is GDP adjusted to exclude the impact of debt-funded consumption. The red line is the real economy on an ex-ECoE basis, and is closely analogous to prosperity as individuals experience it. 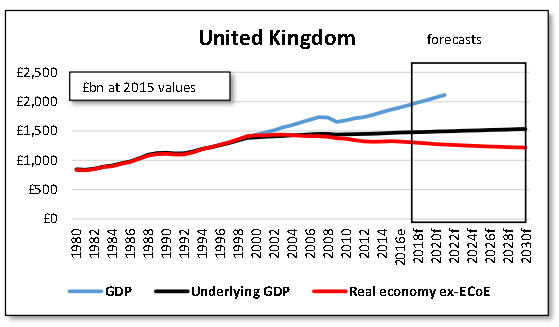 This is almost certainly a serious under-statement, as data for the first nine months of 2016 show that debt actually climbed to £5,408bn in that period, a far larger increase (of £458bn) than the SEEDS algorithm estimates for the whole of the year (£247bn).

Of course, this ratio refers to reported GDP – were the underlying (ex-borrowing number) used instead, the ratio already exceeds 330%, and will be well over 400% by the end of the decade (line 123). 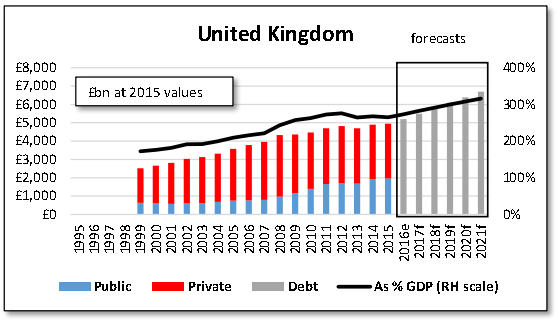 Finally, we need to factor ECoE into the equation in order to measure “real” or “discretionary” income. This measure which has a direct impact on perceived prosperity, because it impacts the income that households have left after the cost of essentials.

Overall, then, the SEEDS assessment of the British economy is very bearish. Individual prosperity is deteriorating – as is the aggregate, once the effect of “borrowed consumption” is adjusted out – whilst debt continues to rise markedly. Dependency on overseas creditors has become acute, mainly because income flows have been impaired by past patterns of asset sales and borrowing from abroad.

Looking ahead, the deterioration in British economic performance is starting to look irreversible, and certainly cannot be halted, let alone reversed, without wholesale changes in policy.

Here is the new PDF for Canada: