THE SCALE AND IMPLICATIONS OF TUMBLING PROSPERITY

In the previous article, we looked at what our handling of the Wuhan coronavirus crisis might tell us about our ability to tackle the looming, even greater challenges of de-growth and environmental risk.

The focus now shifts to the nearer-term, and to the nuts and bolts of economies trying to emerge from crisis. Though faith in a rapid ‘V-shaped recovery’ may have faded, it seems that governments, and many businesses and investors, are still pinning their hopes on over-optimistic expectations. If there’s a consensus now, it might be ‘flatter and longer than it used to be, but it’s still a V’ – and which still places unswerving belief in an eventual return to pre-crisis levels of output and “growth”.

In particular, it seems still to be an article of faith that monetary stimulus can boost economic activity, through and after the pandemic. Though monetary largesse can, of course, be used to inflate capital markets, its effectiveness at the level of the ‘real’ economy is falling ever further into question. Specifically, any realistic appraisal of the probable circumstances of households and businesses in the aftermath of the crisis ought to highlight the nearing of ‘credit exhaustion’, after which point further monetary stimulus becomes tantamount to ‘pushing on a string’.

As you’d expect, the investigation summarised here is conducted from the radically different interpretation that the economy is an energy system, not a financial one. This provides a much more realistic basis of appraisal, not least because it looks beyond the cosmetic “growth” manufactured by compounding monetary gimmickry.

Set out here are the interim conclusions of an analysis undertaken using SEEDS (the Surplus Energy Economics Data System). After addressing the critical issue of prosperity, we look at some regional variations, macroeconomic trends, and some of the implications for households, businesses and governments.

Here are the chief conclusions reached in this analysis:

It should be added that what follows assumes that there’s no serious “second wave” of coronavirus infections, not least because any such outcome could have devastating economic and broader consequences. In those countries which have handled the initial wave particularly badly, this may turn out to have been an over-optimistic assumption.

As the first set of charts illustrates, the most important conclusion of the lot is that people are going to have experienced a sharp fall in their prosperity this year, and it’s not really going to get any better after that. Despite relentless voter pressure for reductions in taxation, global average discretionary prosperity is set to fall even more rapidly in the medium-term.

In short, what we’re facing is a full-blown affordability crisis, for households and governments alike.

Additionally, though this is not shown in these charts, people are going to emerge from the crisis with their savings reduced and the value of their assets seriously impaired, and with average levels of indebtedness a great deal higher than they were before the pandemic.

Summary global prosperity numbers, stated in thousands of PPP dollars per person at constant values, are set out in the table accompanying the charts.

The next set of charts sets out some regional comparisons, at both the total and the discretionary levels of prosperity per capita.

At the discretionary level, rapid falls in tax collection are expected to cushion this year’s slump in prosperity. By 2024, though, and, in comparison with 2019, the ‘left in your pocket’ prosperity of the average person is projected to be lower by 19% in the United States, 20% in Germany, 22% in Britain and – perhaps surprisingly – by 23% in China. Again, supplementary data is summarised in the accompanying tables.

From a macroeconomic perspective, the current SEEDS working scenario equates to a fall of 18% in world GDP this year, followed by recoveries of about 4% in subsequent years, leaving the number for 2024 still some 5% lower than it was in 2019.

Even this, though, would mean that GDP had become a still less meaningful metric than it already is, because the only way in which even this kind of modest rebound could be engineered would be via enormous exercises in monetary stimulus. In other words, it’s possible to massage reported GDP using monetary adventurism, but this simply piles up forward commitments, and inflates nominal wealth, without boosting underlying conditions.

At the much more meaningful level of prosperity – a measure which excludes monetary manipulation, and is stated net of the trend energy cost of energy (ECoE) – global aggregate real economic output is projected to fall by 14% this year, and to remain 13% below the 2019 level in 2024 (by which time the world’s population is likely to have grown by a further 5%).

Although levels of private sector borrowing (and defaults) are almost impossible to quantify at present, surges in government borrowing (and in state underwriting of private debts) imply that debt aggregates are set to go on escalating at least as rapidly as they have in the recent past.

By 2024, world debt stated as a percentage of GDP is projected to have risen to 300%, compared with a provisional 217% at the end of 2019. Critically, though, global debt as a multiple of prosperity is projected to soar from 350% now to a frightening 540% over the same short period.

Since prosperity is the most appropriate measure of the economy’s ability to carry its debt burden, this projection implies financial stresses far exceeding anything in our previous experience.

The aggregate of governments’ estimated tax revenues is projected to fall by 21% ($9tn) this year, and to remain 6% lower in 2024 than it was in 2019. Historic and projected debt, GDP and prosperity aggregates are summarised in fig. 3, with supplementary data again provided. 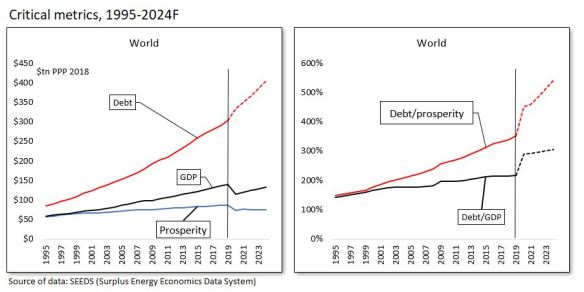 The single most important macroeconomic conclusion to emerge from this analysis is that households are going to be much poorer than they used to be, both in 2020 and in subsequent years. Falls in prosperity are likely to have been accompanied by a severe erosion of savings and, in the absence of quite extraordinary levels of monetary intervention, it should be assumed that most countries will experience a sharp correction in property prices, where affordability issues are likely to outweigh efforts at monetary support.

Additionally, of course, the behaviour of consumers is going to be affected by fears and uncertainties. At the basic level, and even if the coronavirus recedes without a “second wave” of infections, people have now encountered a crisis of which most, in the West at least, had no prior experience. The severe deterioration in their financial circumstances will be exacerbated by broader feelings of insecurity. We should therefore assume that the numerical deterioration in prosperity will be fully reflected in new levels of consumer caution.

Moreover, it’s likely that we have reached the point of ‘credit exhaustion, after which households are unwilling to go even further into debt, almost irrespective of how cheap (and how accessible) credit has become.

This would mean that further efforts at monetary stimulus would equate to ‘pushing on a string’.

These trends indicate sharp falls in households’ discretionary (non-essential) expenditures. It also suggests that affordability issues will start to exert downwards pressures on variable expenses such as rents.

To the extent that they continue to anticipate some kind of ‘flattened V’ recovery, businesses could be in for some very unpleasant surprises in the aftermath of the coronavirus hiatus. This said, some sectors are implementing capacity cuts which seem consistent with assumptions of long-lasting impairment in their markets.

A major new reality for businesses is likely to be a sharp downturn in consumer discretionary spending. Sectors which supply consumers with things that are ‘wants, but not needs’ may find themselves waiting for demand improvements which fail to materialise.

Like households, many businesses will emerge from this crisis forced into more conservative behaviour by impaired cash flows, increased debts and changed perceptions of risk. Many are likely, in any case, to try to prolong cost savings implemented during lockdowns.

This suggests that B2B (business to business) expenditures may remain much lower than they were before the crisis, and that companies will be reluctant to return capital investment programmes to pre-crisis levels.

As remarked earlier, governments’ estimated tax revenues are projected to have fallen by $9bn (21%) this year, whilst expenditures will have soared. In many instances, fiscal deficits could be in excess of 20% of countries’ (reduced) GDPs, dwarfing the deficits incurred during the 2008-09 global financial crisis (GFC).

Unfortunately, the protracted divergence between GDP and prosperity has led governments to underestimate the true burden of taxation as it is experienced by the average person.

As the following charts show, global taxation has remained at around 31% of GDP over a very lengthy period, leading governments to assume that the fiscal burden on the public has not increased. But tax has increased relentlessly as a proportion of prosperity, reaching an estimated 50% worldwide by this measure in 2019, compared with 41% in 2010, and 33% in 2000. In countries (such as France), where the incidence of taxation as a fraction of prosperity is far above global averages, this has already given rise to significant popular discontent.

During 2020, most governments will experience a sharp fall in tax revenues, but are likely to endeavour to push their incomes back upwards in subsequent years. This is likely to encounter popular opposition to an extent which governments may fail to understand, for so long as they persist in the mistaken belief that GDP is an accurate reflection of public prosperity, and hence of the real burden of taxation on individuals.

Voters are, of course, at liberty to act inconsistently – demanding higher expenditure on health care and other public services at the same time as they call for a lower burden of taxation – and this divergence might well characterise public opinion in the coming years.

It will, moreover, be assumed by many taxpayers that their tax burden would be lower if “the rich” and “big business” paid a larger proportion of the total. It will not have helped public perceptions that governments have appeared able to conjure huge sums out of thin air, particularly where investors and large corporates have required (or requested) taxpayer or central bank support.

As we’ve seen, the public are likely to have been shocked, not just by the coronavirus itself but by what has happened to their financial circumstances, and to their sense of economic security. This is likely to mean that the public’s order of priorities undergoes major change, lifting issues of economic concern to, or near, the top of voters’ agendas. Rightly or wrongly, the popular narrative of 2008-09 has become one of ‘bail-outs for the few, and austerity for everyone else’, making the public preternaturally sensitive to any apparent signs of a repetition of this narrative.

Problems don’t, unfortunately, end there for governments. The current crisis will have exacerbated longer-term issues (such as pensions affordability), and shone a new spotlight on topics such as employment insecurity and the plight of the poorest.

Governments might well, of course, be tempted to ask central banks to monetise their debt, a policy which could have catastrophic financial consequences.

In theory, these conditions could be fertile territory for politicians of the traditional ‘Left’, so long as they re-order their policy agendas onto economic affairs, promising greater redistribution and, quite possibly, the taking of important sectors into public ownership. This, though, would mean reversing the main thrust of centre-left policy over an extended period in which they have, to a large extent, accepted the ‘liberal’ ideology of economics.

This makes it quite conceivable that new insurgent (“populist”) parties will make inroads, this time promising left-leaning policy agendas which include redistribution and nationalisation.