At first sight, it might appear a reasonable inference that the greatest significance of Mr Trump’s decision about the deal with Iran will be felt in oil markets. The reality, though, may be rather different. Oil may not be hugely affected, and the Iran decision might not do all that much to hasten the next supply squeeze.

The line explored here is that the greatest ramifications of President’s decision may show up in two other areas.

One of these is a widening in the nascent schism between Europe and America over what “capitalism” really means. This is a topic that we’ve explored here before, and needn’t revisit now. This said, the Iran situation could prompt Europe (and others) to accelerate their retreat from the “Anglo-American economic model”.

The other consequence, of far greater immediate practical importance, is what this development might mean for fiat currencies.

To put this in context, we need to remind ourselves of three critical points.

The first is that the US dollar relies massively on the “petro-prop”. Because oil (and other commodities, too) are traded in USD, anyone wanting to buy these commodities needs first to purchase dollars. This guarantees buyer support for the USD, and this in turn gives the dollar a big valuation premium.

If you convert other currencies into dollars on the basis of the prices of comparable goods and services, what results is a PPP (purchasing power parity) rate of exchange. If you then compare this with market averages, you can only conclude that the markets price the dollar at a premium to the fundamentals.

And that premium is massive. Through 2017 as a whole, for example, the market priced the dollar at a premium calculated by SEEDS at 78% above its purely economic (PPP) value. This isn’t new, of course, and premia have certainly been the norm since America ended gold convertibility way back in 1971.

But it’s the dollar’s “petro-prop” premium which alone enables the United States to issue massive amounts of debt – and seldom this can have been more significant than it is now, given America’s bizarre budgetary outlook.

It’s also at least arguable that only the “petro-prop” has allowed the Fed to run huge QE programmes, without either (a) risking severe currency depreciation, or (b) having to maintain interest rates at appreciably higher levels.

So, if you think that QE and ZIRP have underpinned the global financial system in a beneficial way since GFC I, then you have the “petro-prop” to thank for this outcome.

If, conversely, you share the view that “monetary adventurism” has been a new exercise in recklessness, then the “petro-prop” should carry much of the blame.

Either way, the “petro-prop” is a critical feature of the monetary landscape.

Any weakening of it could usher in hugely disruptive change. The one thing, above all, that the United States really doesn’t need right now is for countries buying and selling oil to start doing so in currencies other than USD.

The second point we need to note is that, whereas GFC I, as a consequence of “credit adventurism”, put the banking system at risk, GFC II could extend the risk to the world’s fiat currencies, because the folly-of-choice since GFC I has been “monetary adventurism”.

Fissures in the monetary system are already showing up, initially in the plunging values of a string of EM (emerging market) currencies.

The consensus assumption seems to be that this is happening because of a strengthening USD.

This interpretation, however, is probably far, far too simplistic. The reality might be that investors are becoming more risk-averse, prompting a flight of capital out of EM economies.

This sort of risk aversion, albeit concentrated then on banks rather than national economies, happened in 2007, with the “credit crunch”.

If we call that the “banking credit crunch”, and regard it as the precursor to GFC I, then it’s reasonable to view current trends in EM currencies as a “currency credit crunch”, setting the scene for GFC II.

The third in our triumvirate of foundation factors is that fiat currencies, and the financial system more generally, already stand at unparalleled levels of risk – but anyone who assesses these issues along conventional lines is not in a position to appreciate this risk.

Essentially, stock numbers (such as debt), and flow data (typified by reported GDP), are insufficiently connected by conventional interpretation. Imagine that a given economy’s debt rises but, at the same time, its GDP increases, too, restraining the expansion in the ratio. This would be a mathematically valid equation if changes in stock don’t impact measured flow – but they do.

The GDPs of advanced economies (in particular) are dominated by household consumption, which typically accounts for between 60% and 70% of activity measured as GDP. But pushing credit into the system boosts this consumption, thereby invalidating much of the apparent debt ratio comfort derived from apparent increases in GDP. In short, a cessation of credit expansion can expose masked debt risk by undercutting debt-financed expenditures.

That such an event looks increasingly likely is underscored by Nomi Prins’ recent observation that the next threat to the system may be bottom-up, not top-down.

Authorities and observers are accustomed to appraising top-down risk, assessing – for example – the scale to which banks’ assets might be vulnerable.

What happens next, though, could very well be bottom-up. What this means is that hard-pressed borrowers might stumble off a treadmill in which debt servicing has become an increasingly onerous burden within the context of flat-lining incomes and rising household expenses.

What are the risks?

The SEEDS answer to the risk issue is to use calibration based, not on credit-inflated GDP, but on prosperity. The aim is to strip out the component of growth which derives from the simple spending of incremental borrowed money. At the same time, SEEDS factors in trends in the energy cost of energy (ECoE).

An ongoing SEEDS study of the Big Four fiat currencies suggests that risk exposures may be very, very much greater than conventional (GDP-based) calibration indicates. Debt, for example, equates to ‘only’ about 250% of GDP in the United States, but rises to 340% when measured against prosperity.

All of these ratios – both for debt and for financial assets, measured against prosperity – are far higher now than they were ten years ago, on the eve of GFC I – which isn’t what you’d conclude if you settled for measuring both against credit-inflated GDP.

This leads us to two immediate and very sobering conclusions, neither of which should really come as any great surprise. Indeed, both are pretty obvious, properly considered.

First, if a country spends a decade gaming its currency, it masks the attendant risks, just as it is increasing those risks.

Second, any course of action tending towards a weakening of the dollar’s “petro-prop” could have unexpected consequences. Of course, we don’t yet know what Mr Trump’s Iran move really means, and we don’t know how Russia, China and – critically – European countries are going to respond.

One thing, though, seems certain. Whilst it proved impossible for Saddam Hussein’s Iraq to shift oil trade away from dollars,  there is no reason why really big players shouldn’t do exactly this. If major oil importers such as China, India and even the Euro Area develop new bilateral terms of petroleum trade with Iran, there is no reason whatsoever why these deals should be conducted in dollars.

In the proverbial nutshell, when your need for debt capital is being pushed up by budgetary irresponsibility, it makes no sense at all to undermine demand for your currency. 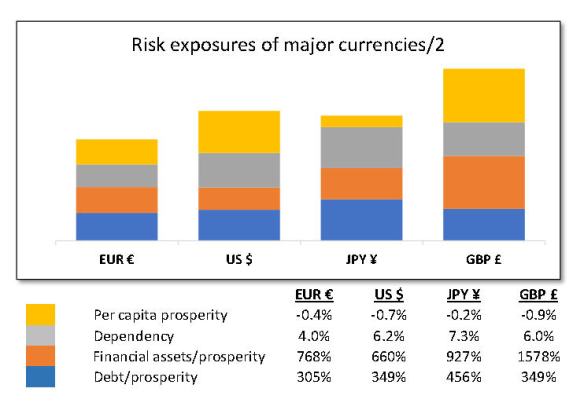